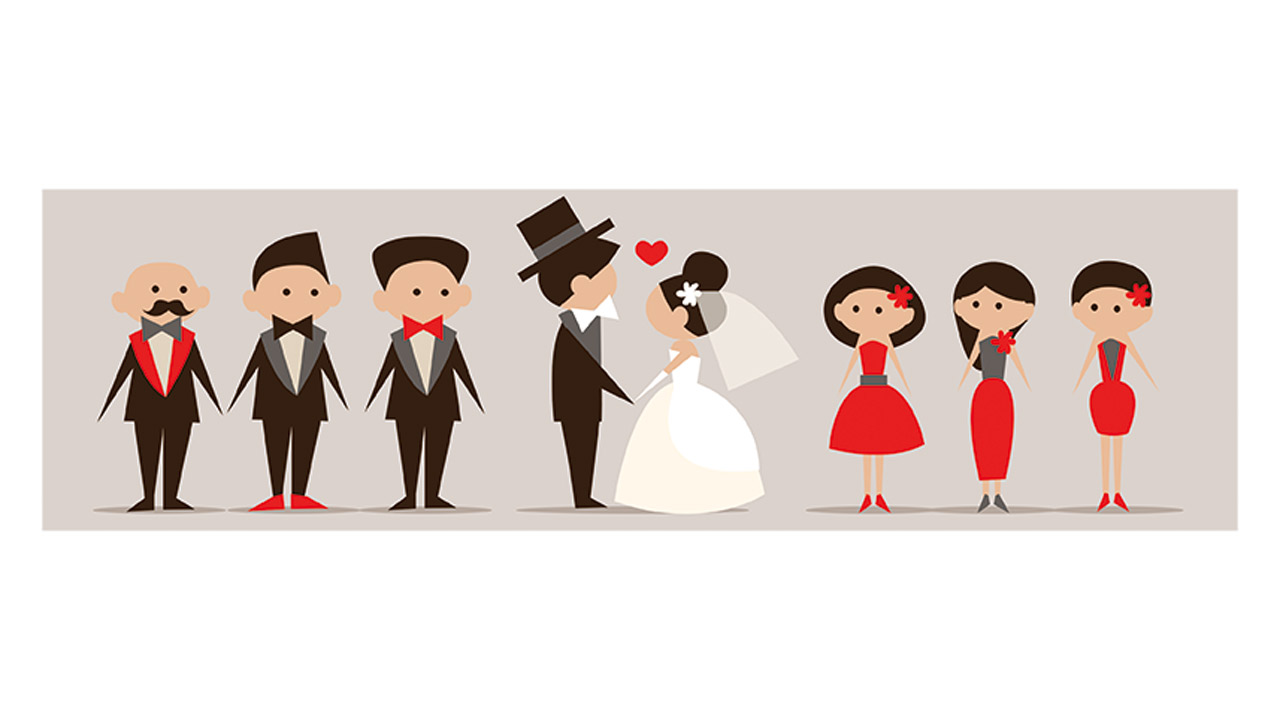 Unfolding the History and Facts Behind the Bridal Retinue

Weddings have evolved into lavish affairs in the modern world and everything in a wedding is a display of extravagance. The Bridal Retinue is merely a way to add more colour to the wedding celebrations. They not only make the Bridal procession down the aisle awe-inspiring but also add more fun to photographs of the newlyweds while making spectacular memories during the photo-shoot sessions. Apart from what lies on the surface – the Retinue also carries around a tremendous amount of responsibilities for the wedding.

Have you ever wondered how Bridesmaids and Best Man came into trend? The retinue – whose duty is to help with your wedding preparations, get dressed on your Big Day and cater to your requirements – initiated due to motives undreamed-of.

Tracing back to the feudal era, the couples faced many threats and generally, brides were susceptible to kidnapping by jealous suitors who intended to harm them. And so, bridesmaids were decked up in dresses that were a facsimile of the Bride’s wedding gown, while ushers wore clothes that were similar to the Groom’s attire – believing that it would confuse the rivals as to who were the real Bride and Groom. Well, not only that – being a Bridesmaid carried superstitions along with it as well! In the 16th century, it was believed that if a maiden girl served as a Bridesmaid three times, then the evils spirits had cursed her. And, in order to break the spell, she had to be a Bridesmaid four more times – making it a total of seven episodes in the wedding trail. Peculiar – isn’t it?

Well, not only do Bridesmaids have various origins – the Groomsmen do too!

Originating from the Anglo-Saxon tradition in the primitive age – more likely to be called as the “marriage by capture” era in regard to weddings – Groomsmen were actually the Groom’s friends who assisted in kidnapping the Bride if her family was opposed to the marriage. They would form an army to protect the newlyweds from the irate horde. However, the Groomsmen were also referred to as the Bride’s Knights. Their duty was especially to guard and protect the Bride while they ensured she reached and left the wedding venue safely.

Moving the focus away from the action-packed scenarios of the age-old weddings, let’s see what the role of the Best Men were at that time! The Best Man literally stands beside the Groom. Yet, did you know that it was completely in contrast to the traditions of the ancient times – where they actually used to stand beside the Bride? The myth is that the Best Man would continue his role as a guardian of the Bride throughout the whole ceremony. What’s amusing about this is – the Grooms eventually grew jealous as several Groomsmen took their roles a bit off-the-edge, resulting in the banishment of the Best Man being on the Bride’s side of the retinue forever.

However, wedding parties didn’t include only Groomsmen and Bridesmaids, it also consisted of petite and endearing children back then too! The role of the little girls was to entertain the guests while the small boys held the Bride’s flowing train. The children used to carry the wedding rings and this still continues as a tradition in the present world – where they are most commonly known as Ring Bearers.

Duties of the Bridal Retinue

In the modern world, the Groomsmen and Bridesmaids are known for assisting the engaged couple with anything they need in regard to the wedding and cater to them to make sure they stay out of pressure and keep calm.

The Maid of Honour – usually the Bride’s sister or best friend – shoulders most of the responsibility. Some of the duties include fixing appointments for dress fitting, organising the bridal shower and go on shopping errands for the Bride. Besides, on the wedding day, the Maid of Honour is expected to arrange the Bride’s veil and train during the ceremony, hold her bouquet at the altar and help the Bride change before they leave for their honeymoon. However, the other Bridesmaids accompany the Maid of Honour in these duties as well.

Likewise, the Best Man – like the Maid of Honour is to a Bride – is the person who shoulders the responsibility of assisting the Groom throughout the wedding-planning. The Best Man’s duties include organising the bachelor party, taking the initiative to arrange their attire fitting and pick up the Groom’s outfit before the wedding. These are some of the duties just before the wedding! The wedding day demands more support from the Best Man when he has to make sure the Groom reaches the venue on time, bring the Bride’s ring and coordinate the toasts during the reception. He also makes sure the getaway car is ready with the couples belongings kept inside.

The bridal retinue is often picked from the couple’s closest friends or relatives. They even choose the attendants from each other’s sides in order to create a bond and promote unity within the families. Besides – who wouldn’t want their best friend to be next to them during all those wedding jitters?

So – Are you engaged and planning to tie the knot anytime soon? Then this is the time to gather your troops!