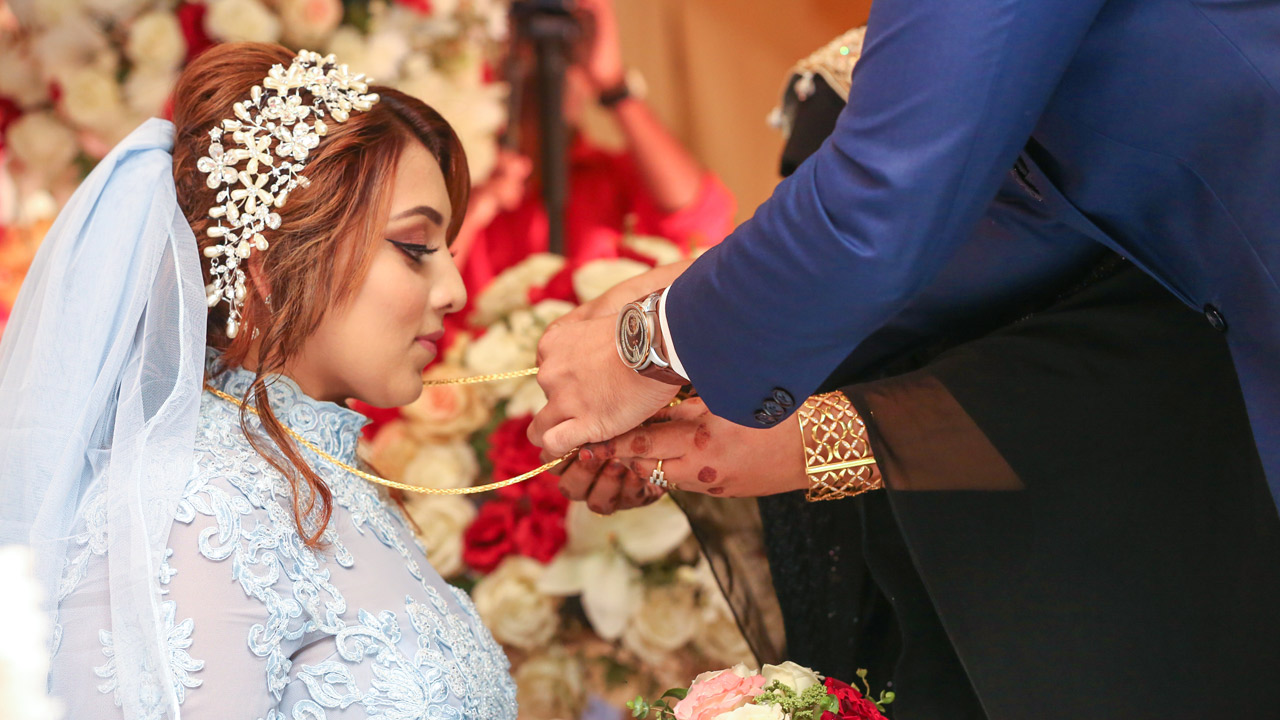 A Look Into Muslim Wedding Ceremonies

“And among His signs is this, that He created for you mates from among yourselves that you may dwell in tranquility with them and He has put love and mercy between your hearts: verily in that are signs for those who reflect” (Quran).

Marriage is a blessing by God for one man and one woman to be drawn by the invisible Red Thread of Fate and share a lifetime of joys and trials together. The importance of a couple’s union through marriage is depicted by the phrase in the Quran which says, “They (your wives) are a clothing (covering) for you and you too are a clothing (covering) for them.” Apart from being only a tool for beautification, clothing also covers any defects or flaws that our physical body may carry, enabling the eyes of the ones around us to not notice these imperfections. A spouse, under the Islamic context, acts as a covering to our imperfections similar to a clothing. Thus, Islam promotes spouses to protect the honour and integrity of one another instead of ridiculing them owing to their flaws.

Ages ago, marriage was as simple as earning one’s daily wherewithal and couples tied the knot under the fundamental basis of faith with no tension of heavy expenses and dowry. The nuptial only consisted of a Nikkah and a Walima feast hosted by the Groom afterwards and this would even consist only of dates – Simple as that! But now – surpassing the minimalism of the Islamic Law, lavishness or the need for a guest list as long as Rapunzel’s hair has gradually resulted in the need for a heftier saving.

Let’s not forget that the rituals are still being preserved while it is still combined with many other traditions nowadays and this varies due to the evolving diversities within countries and communities. Let’s read on to take a closer look at the rituals of an Islamic wedding….

A fad as a result of changing preferences in the wedding ceremonies, The Mehendi night has become an important part of the series of events that happens in the wedding week. At present, all girls have their Mehendi ceremony at the top of their priority list of must-haves and this is usually held one or two days before the Big Day. With ebullient themes such as florals or pastel colours or a much intense setting of Arabian or Indian, the Bride applies henna in which some even hide their partner’s name or initial. Families that are less conservative allow the Groom to be present at the all-girls ceremony and he even has to find out his name in his Bride’s hands! This ritual influenced by the fancy Indian traditions are most often an attempt to make their ceremonies much more special instead of maintaining the mediocrity passing from generations on end. The Mehendi is not only to show one’s moves to those desi party anthems and have that time of the year with all the girl-mates, but also when the Bride gets showered with a lot of gifts, called the Marawa, and blessings from her in-laws.

This ceremony consists of the signing of a contract by the Bride and Groom in which the Groom proposes to his Bride in front of two male witnesses. The nuptial is pronounced official when the Bride and Groom each state their will by repeating Kabul (‘I accept’ in Arabic) three times. Following this, the couple along with the two witnesses sign the contract, completing all formalities required to make the marriage legal in the aspect of religious and civil law.

However, in Sri Lanka, during majority of the Nikkah ceremonies the couples are separated. In such cases a male representative known as the Wali – more often the Bride’s father – acts on behalf of the Bride during the Nikkah. The location of the Nikkah ceremony is absolutely a place of the couple’s choice, but every so often most ceremonies take place in Mosques as it is considered to be Sunnah (Way of The Prophet).

The importance of dowry is such that it has penetrated our society like a vile missile masked as gifts of love, while the Bride’s family pays a heavy price to send away their daughters with honour and pride. Islam has never encouraged dowry as it is a way of downgrading the status of women but the law does state a mandatory payment – aka Mahr – to be given by the Groom to the Bride without which the Nikkah will not be valid. This Mahr is usually presented in the form of money or jewellery which the Groom himself will adorn the Bride with during the ceremony. Symbolizing her security and freedom within the marriage, the Bride gains complete ownership over her gift of Mahr to use as she pleases.

In contrast to the norm of the Groom waiting at the altar for the Bride to walk into his hands, the Bride sits at the dais till her Groom comes to unveil her face that is often covered with a dupatta or in most cases – by the veil net. After unveiling her face, the Groom holds a strand of the Bride’s hair and recites a prayer as it is yet again considered to be a Sunnah. Moving on to the feast, while the couple enjoy their first meal as Husband and Wife, they feed each other as an act of love.

The Walima – or Homecoming ceremony – is held after the consummation of the marriage to celebrate and share the couple’s joy of a new nuptial journey. It is an extravagant, grander function and is hosted by the Groom but a handful of Brides’ families willingly share the organizing costs as well. This reception does not involve many rituals in comparison to the others and is commonly held to publicize the marriage.

Traditions As a Result of Diversity

Borrowing the rituals and customs from other communities, the ceremonies of a Muslim wedding consists of much more comprehensive and varying traditions. The Memon community, with its origins rooted at Pakistan and North India, have much more ceremonies than one could count and most often closely resemble the customs of their dynasty. Their ceremonies are held late at night compared to the other ethnic groups and are much livelier. Less conservative families who celebrate their weddings in hotels combine western traditions in their Big Day such as the couple’s First Dance and raising toasts.

On the other hand, majority of the families separate the women guests from the Gents and as a result, the Groom does not usually hang around the women’s partition after the rituals come to an end.

Simple or lavish – every wedding ceremony has its own charm owing to the love and cheerfulness!